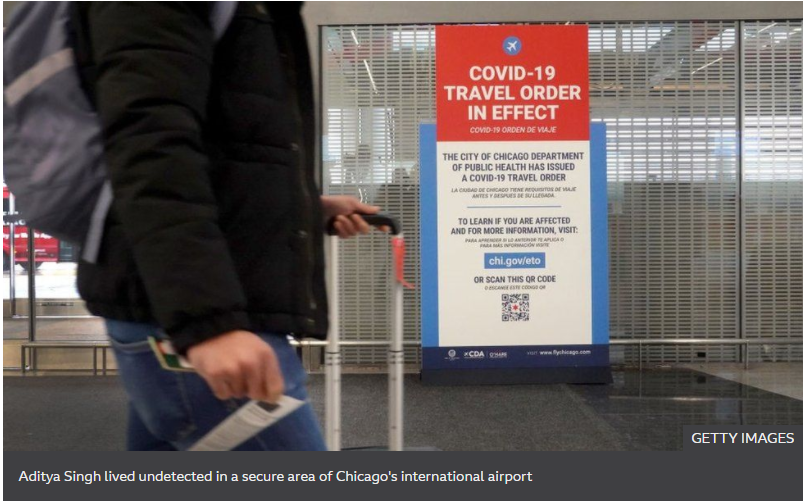 According to the reports received from the US prosecutors, a man who was too afraid to fly due to the Covid 19 pandemic took a shelter at an undetected place in the Chicago international airport. She has been residing in that secure area since 3 months. Aditya Singh, who is 36 years old, got arrested on Saturday after the airline staff asked him to give his identification. He pointed at the badge, which originally belonged to an operations manager who had earlier reported about its missing since the month of October. Mr Singh had arrived on a flight from the Los Angeles to O’Hare International airport on 19th October 2020 and he said that he “was scared to go home due to Covid.”

Cook County Judge Susana Ortiz expressed her surprise at the case and said, “So if I understand you correctly, you’re telling me that an unauthorised, non-employee individual was allegedly living within a secure part of the O’Hare airport terminal from 19 October 2020 to 16 January 2021, and was not detected? I want to understand you correctly.”

Talking more about Mr Singh’s original identity, he originally lives in a suburb of Los Angeles and is devoid of all sorts of criminal background. As per the assistant public defender Courtney Smallwood, it is still not clear why he is in Chicago. He is however, charged with felony criminal trespass to a restricted area of the airport and misdemeanor theft. He is barred from entering the airport until he is able to post 1000 dollars for bail.

The judge Ortiz further said, “The court finds these facts and circumstances quite shocking for the alleged period of time that this occurred.” “Based upon the need for airports to be absolutely secure so that people feel safe to travel, I do find those alleged actions do make him a danger to the community.” Last but not the least, the Chicago Department of Aviation that the fan has not posed any security threat to either the airport or the travelers.