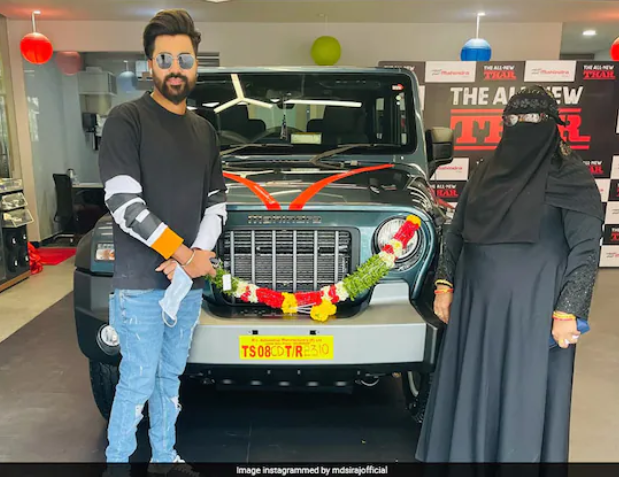 NewsDio Desk : The Indian cricket team showed its heroic performance earlier this year when it was playing the test series in Australia.

The team has certainly managed to make the most of the available opportunity as various newcomers gave their best to snatch the win from the hands of Australia. This is where as a noble gesture which is certainly going to motivate the young talent as Anand Mahindra has promised to gift cars to six players whose remarkable performance was certainly the talk of town.

Yes, the six players showed their mettle and capabilities by proving their worth right through the series where Mohd. Siraj was one of them. Siraj got the beautiful gift in the form of a jeep and he certainly didn’t leave the opportunity like this. He actually took to social media to thank Anand Mahindra for considering him as the player as he is certainly short of the words.

Siraj tweeted that he can’t find words to express in detail to what he is actually feeling, after getting the beautiful gift.  He added a big thank you to the Mahindra Sir.

Siraj was quick in sharing the picture where his brother has gone to receive the award on his behalf along with his mother, as he has been away due to IPL related obligations.

Siraj started his career in the second test in Melbourne where India registered its victory. He was a shining start.

On one hand, as India was reeling under various injuries, Siraj happened to make its presence felt with an awesome bowling attack, where he counter attacked the Australian batsman and thanks to its noteworthy performance he was a star in the two tests.

Siraj got to its cricketing career a five wicket haul in second innings at Gabba where he led India to a historic win that also helped the team to clinch the series.

The photo son with his mother standing in front of the gifted car can certainly make any mother proud. While Siraj’s mother was rightly feeling at the top of moon, owing to the extent of popularity and laurels which his son has brought for not just his family, but also for the country.

The photo speaks about the hidden desire which every mother has for his children where she wants to feel proud of the son’s success and the gift of car has seen jubilation in Siraj’s family who is really thankful for the big gift which Anand Mahindra has given.

Cricket has always been the religion in Indian subcontinent where tiny tots have grown up to young adults while playing and watching the game. It is the sheet joy of watching with friends, which heighten the joy further.

The invaluable boost by Anand Mahindra will go further in motivating the young talent towards scaling further.

Let’s wish that the best talent continues to scale India to heights where everyone has a great cricketing career to help India reach the zenith.