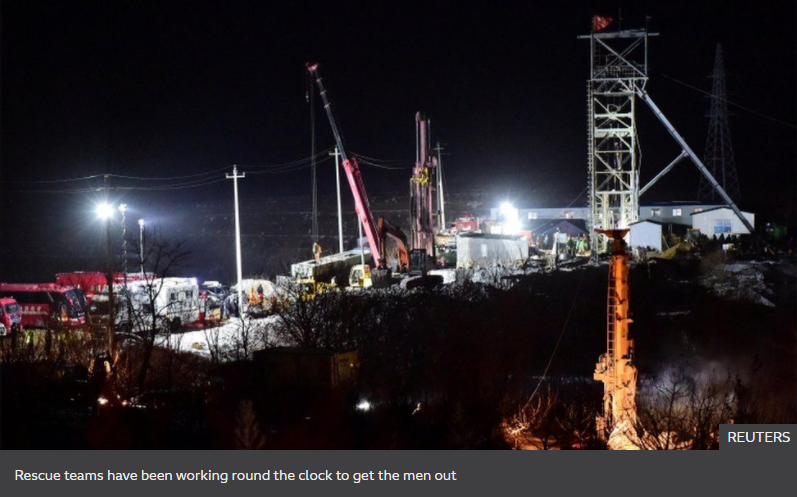 An explosion in the Chinese gold mine a week ago has created a lot of grief in the area, and for the families of the miners who have been working out there! 12 miners were trapped underground and it seems as if they are still alive. They have sent back a note that read, “don’t stop trying to reach us.”

They found this note as the rescuers were trying to seek signs of the lives that lowered down and then they were able to tap a wire cable. A telephone connection is now set up and the fate of another 10 men who have been missing after the blast had occurred is still hazy. There is no clue if they are even alive or dead. The mining incidents in China are nothing extraordinary and too often, it happens only due to poorly enforced safety regulations. The 22 people who were trapped at the Bishan mine near the Yantai in the eastern region of Shandong province on 10th of January 2021. The explosion had created a damage to the exit and the communications system of the mine that was still undergoing construction.

The rescuers have spent several days trying to tap and wait for the survivors, seeing if there is any hint of their survival. However, they could finally feel the pulling on the ropes that were lowered into the mine. As per the media, the rescuers are managing to make contact with some of the miners via a long, communication shaft that they had drilled beneath the surface. They have even sent food, paper, pencils be medicine into the hole. Finally, they received a hand written note that said that 12 people are still alive in the middle section of the mine. The note writer has revealed, “There are 11 others – one is injured, and the status of the remaining 10 is unclear.”

In the note, he has asked for sending pain killers, and also mentioned that they have been hoping for a rescue soon. Chen Fei, the deputy secretary of Shandong’s Yantai city, said that phone communication will be enabled soon with the trapped miners. He further said, “After we opened up the third shaft, it had a really excitable effect on the people connected. They were very confident and very hopeful that they would soon be able to get out of the mine,” he told a news conference. We established they needed emergency medicines and equipment.”