Yes, it is happening. Dora the Explorer is indeed getting into a live action movie.
Under the production of paramount, it is an upcoming movie adapted from one of
the massive hit shows of Nickelodeon with the same name.

Dora the Explorer series featured an animated Latina character. Aired between
2000-2014, it was an educational series about a 7 years old American Latina living
in a jungle going on adventures with her monkey boots.

Recently the movie trailer has been released which looks promising. Shooting for
the movie is underway already.

Looks like the makers are going to serve a big screen version of our favorite
childhood series. Are you excited already? Read further for more insights about
the star-cast, release date, and other details. 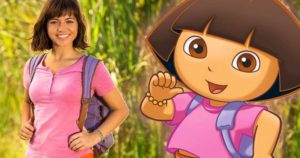 Specifications: The movie was announced at the end of 2017 under Paramount’s
production. It is under the direction of James Bobin (The Muppets director). The
script is written by Chris Gifford and Danielle Sanchez-Witzel. An interesting thing
about the movie is Dora has become a teenager. She has moved to a city to live
with her cousin Diego. It will be fun to watch what teenage Dora is up to nowadays.

Star-cast: Isabela Moner, known for Transformers: The Last Knight will be
playing the teenage version of Dora. In an interview, Moner said that she is
honored and very excited to play this role. She has grown up watching the show.
She finds Dora strong, adventurous, fun loving girl and true role model.

In the movie trailer, Moner is pulling off Dora’s character very well. Thor famed
Adriana Barraza will be playing the character of Abuela Valerie (Dora’s Grandmother).    The film also stars Micke Moreno to play the role of Diego (Dora’s cousin).

Release Date: Seems like Dora’s fans do not have to wait for long. Dora the
Explorer movie supposed to be released after a few months. Shooting for the
movie has already been started in Queensland, Australia. It will be ready by the
start of 2019 and will be going on the screen in August 2019.

Trailer Review: The Movie trailer has got mixed reviews. As per a set of
audience, Dora the Explorer is a nostalgic show who is not supposed to be
converted in a live-action movie.

Dora was apparently 7 years old in the series. Now, in the movie she has become
a teenager. It is confusing which age group the makers want to target through the
movie. People loved the show but now it doesn’t make any sense to make a live
action movie adapting from an educational TV series.

On the other hand, most of the Dora fans are very excited about the movie and
eagerly waiting for its release.

It will be exciting to see how this big hit animated series turns out to be on the big
screen. We can’t wait to see Dora pulling the backpack for a new adventure once
again.

Finally, the feud between Nicki Minaj and Cardi B ended! The altercation between them hit the headlines for manydays. The…
bySana Usmani

Rumours on Just cause 5

Avalanche Studios created the game ‘Just cause’ which is an action-adventure game. The games of just cause are…
byZaheer