ZeniMax, the parent company of Bethesda Games Studios- developer of the Elder Scrolls 6 has recently filed a trademark for ‘Redfall.’

Now, this trademark pretty much could mean anything, but many fans like to speculate it to be an implication for the new title of the Skyrim sequel. So, as per the fans, the Elder scrolls 6 title will be ‘Redfall,’ (red for the blood and fall for the fall of man as vamps chase them down) the same way that we refer to Elder scroll V as ‘Skyrim.’

Whether ‘Redfall’ is an event or is really attached to the elder scrolls 6 remains to be seen, however, lots of wild imaginations have been triggered in the minds of the fans and we will see if it has any bearing to the game at some point in the future.

Predictions of the possible destinations

The most likely destination for the Elder Scrolls 6 game is thought to be Hammerfell, and this is just mere assumption drawn from the teaser shown at E3 by Bethesda games studios.

For the sake of narrowing down, we need to slash other places which do not fit the bill. Firstly, as we see the teaser it gives a clear idea about the landscape- dry, rocky, mountainous with thinning, shrubby greenery through-out the place and most importantly the sea, to the right.

So, if we are looking for the place shown in the trailer in the Tamriel maps then we have to find for a dry, arid, marshy green area and to the right side of this place, a sea should be witnessed.

We can exclude Morrowind, cyrodiil, Skyrim and summerset isles as we have recently visited it and they feature different climate which would not match the climate shown in the trailer. So, there are a lot of other places which could fit the bill. Let’s see which would match up to the location and the climatic conditions. 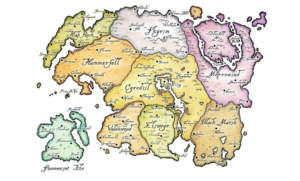 Working from the above map, the following cities are possibilities: Farrun, Northpoint in the high rock region; Archon and soulrest in Black Marsh, Falinesti, Woodhearth, Southpoint and maybe greenheart in Vallenwood, or maybe Taneth in Hammerfell.

From the topography of the land and the climate, we think that Vallenwood and Black Marsh are pretty much ruled out and that means we are left with High rock and hammerfell.  We can get the final verdict as hammerfell as there are 2 reasons. One, high rock can be ruled out (reasonably, but not as definitely as Black Marsh and Vallenwood) for its own reasons; and two, because the city of sentinel particularly fits well.

Why do we think Hammerfell fits well?

The reason we think why it fits well is clearly not strong though, however it is not totally baseless. The one key reason it fits best is for the fact that sentinel, a major Hammerfell city seems to slot in perfectly well to the location shown in the teaser. You can just take a look at how it fits this fan made up map, of Hammerfell, and the location and surrounding environment of sentinel in particular.

We can notice the small bit of water body covering the area right next to the land while we move from north to south, as we can see the same in the trailer as well. The slight bit of greenery can be seen in the areas covering the other mountains ahead that would sit in the desert and behind it in the distance. These all points cannot be ignored even when it is a fan made map.

There are a lot of assumptions that can be drawn from the trailer about where they could take us this time. It is far from known and we hope they will reveal a good chunk of an idea in months or at least in days so that we can at least get some real idea about the location setting.

The CEO Ahmad Khawaja of Allied Wallet stands as a globally leading provider of online payment processing. The…
byZaheer The Benefits of Clearing Your Credit Card Balances

Your credit cards offer an incredible and convenient way to pay for your everyday purchases. As a credit…
byZaheer