The Game of Thrones series has given what many series could not give, they gave the series of the century which includes not only the plot to kill someone to acquire the throne but also some spicy fictional story which makes it more intriguing to watch. Game of Thrones is based upon 7 kingdoms wherein the King’s landing is the largest city and also the capital of the 7 kingdoms, it is the place of the iron throne and the red keep, the seat of the king of the Andals and the First Men.

The series has contributed mind-boggling climax scenes in each season which delivers a shock that runs down to the core of the body. Game of Thrones has been inspired by the novel ‘A song of ice and fire’ written by George R.R Martin. The series The Game of Thrones season 8 will be released in April 2019. The seven parts altogether have created and amused the fans along with making everybody guessing in every season. Some fans say that The Game of Thrones is the best series they have watched so far when it comes to drama genre, it is all because of the story and the barbarism that is followed in the series. 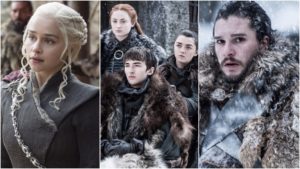 GOT season 8 is due for the release and people have already started guessing and anticipating the end. The final part will reveal who will be the rightful heir to the 7 kingdoms. To begin with the ruling, it is no walk in the park to rule 7 kingdoms, so many great leaders have attempted to keep a hold on to the iron throne but none of them succeeded.

The Winterfell is in ruins which once was a place of bliss with all children playing, women engaged with their works and men trying to secure the north from white-walkers and from the wildlings. All sit in ruins and the north remembers it. To strike down the fury of their homeland in ruins the sons of Eddard stark are either crippled or not capable to rule the 7 kingdoms. However, Sansa and Arya, two girls of Eddard stark are still alive and will fight to the death until they avenge their family’s death.

On the other hand, we have seen Daenerys Targaryen, daughter of the mad king who once was the king of 7 kingdoms before being stabbed by his own guard who happened to be a Lannister (A family currently ruling the 7 kingdoms), enraged due to the betrayal of the Lannister. Her love for the people to serve them gives the fans a softer corner toward her. However, the 7 kingdoms are not easy to conquer but with 2 dragons on her side along with the trained unsullied can give her an upper hand over Lannister.

Well, in GOT season 8 only humans are not involved, the main story depends upon the white-walkers too, who have already taken one of the three dragons from ‘Daenerys’ who is called the mother of dragons.  It totally depends upon them if they will outnumber the humans or will they get extinguished between the royal families who are ready to kill anyone who comes in the way of the throne.

A teaser was released officially which gives the look of Westeros, where you can see the fire engulfing from one side and ice swallowing the land from the other side colliding each other at the middle of the trailer. This suggests that the end is near where one will only stand who will rule and kill them all. Game of Thrones teaser was released but no release date was confirmed. As per the guess and the pattern they have followed we think this time also they will release in April only. To see how creative and ruthless George R.R martin is we would need to see the final chapter of The Game of Thrones season 8.

The show has been liked much and the first seasons did magic in the hearts of people. So…
byZaheer