Gracie McGraw was spotted in a family picture on a vacation. Recently, she has shared a picture of her family roundup in a tropical vacation wherein they were enjoying altogether. Faith Hill and Tim McGraw’s daughter shared pictures of herself relaxing during the vacation in a cute swimsuit that had attracted everyone. Gracie was seen to be showing off her forehead tan line.

Gracie McGraw who is just 23 years old seems to be starting her year in a totally relaxed mode wherein we find the fashionista sharing a selfie from her tropical vacation along with her family and she was noted in a green, floral-print swimsuit with crystal-clear ocean water right behind her. She shared this post on 5th of January and along with that, she had shared the image of another cute swimsuit in the slideshow itself and that was a zebra stripe bikini top and olive green bottoms.

A vacation with Gracie McGraw

Such a sunny vacation is indeed a pleasure to chill, but there’s just a single downside of it that can no way be escaped and it is none other than the tan lines. Gracie had even revealed that she would not get them in the usual area. In one of the videos that she had shared publicly, we see her lifting her bangs and revealing all that she was left with, a forehead tan line. Gracie was also noted to be sneaking in a behind-the-scenes photo of herself wherein she was transforming herself into George Washington who ties a connection with Gracie’s dad and that was revealed in front of NBC in an episode of Who Do You Think You Are in 2011.

The picture was taken during the pre-vacation where Gracie along with her family was having a nice Hamilton-themed dinner prior to Christmas. Indeed, that was one of the best themed dinners that the family held. Alongside, there was another night when the family celebrated an auspicious themed night wherein all the family members were dressed in Harry Potter characters.

Gracie wrote beneath the mix of vacation and throwback photos as, “Just some things I felt were important…… disclaimer me becoming ole georgie wash was from a month ago but still important.” She has been there with her parents and 2 of her sisters, Maggie who is 22 years old and Audrey who is just 19. She was looking really pretty in the bikini shot and it was evident that she has been enjoying it like crazy before kick starting the year 2021.

The family didn’t give any clue about the trip but on the other end, we see Faith and Tim owning a 20 acre private island in the Bahamas. We heartily wish them a happy new year and we do hope that the year 2021 is going to bring them a lot of joy and good vibes with a lot more positivity. 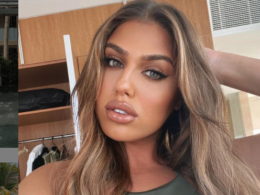