The upcoming bout between Tony Ferguson and Justin Gaethje will act as a welcome distraction from current world events, and present a real dilemma for even the most accomplished of UFC experts.

There is no question that Ferguson is a real fan-favorite, having shown the ability to win by either submission or stoppage in equal measure over his last five bouts.

In terms of the pre-fight odds, we look at how the risk of his streak being derailed compared next to the defeats suffered by fellow ‘faces’ of the UFC in years past.

Going into the month of UFC 249, the odds on Justin Gaethje beating Ferguson are hovering at around +150 (or 6/4). In terms of raw numbers, that would give him double the chance Nate Diaz was given (+300 or 3/1) by most sportsbooks prior to his UFC 196 bout with Conor McGregor.

Not much was expected of the famously inconsistent Diaz, who had ten losses up to that point with the last one coming against Rafael dos Anjos – coincidentally, the very man McGregor was meant to fight in Diaz’ stead.

Diaz was able to comfortably avoid McGregor’s power in the first round, while out-striking him and gradually wearing him down. The second was a different story with Diaz taking a number of heavy blows with a huge cut opening up.

As soon as the fight went to the floor, however, Diaz was able to get the best of him and won via a rear-naked choke:

An even bigger shock unfolded five years earlier, and this one really does give Ferguson food for thought. In 2006, Tito Ortiz beat Ken Shamrock to maintain his four-year reign as the UFC’s biggest draw in his weight category.

In the five years following that win, however, Ortiz lost four and drew one of his following five bouts. Though Ryan Bader was coming into this bout after a loss, he was a huge favorite to win – and end Ortiz’ career.

The fight only lasted one round as the +340 (17/5) outsider Ortiz hit Bader with a huge right hand and took advantage of his stunned opponent with a guillotine choke. It was a stunning performance, and a textbook example of fight management:

How does this one play out?

With an implied probability of 40% for a Gaethje win, the integrity of Ferguson’s current winning streak is very much hanging in the balance. Ferguson’s hybrid abilities in wrestling, boxing, Jiu-Jitsu and Muay Thai certainly see him boast a great all-round advantage.

Even so, Gaethje has seen 18 of his 21 career wins come by way of knockout, despite coming from a wrestling background.

With Ferguson defending his record-breaking winning streak in the lightweight division, a conservative start to the bout may be forthcoming, producing a floorwork-centric theme. That is not to say we won’t get a late flourish from Gaethje, especially if he can find holes in Ferguson’s guard early on.

Overall, it will undoubtedly be a fascinating encounter.

Want to know the secret to win a thousand-dollar paycheck when betting on Daily Fantasy Sports (DFS)? Like…
byDanish It’s arduous to believe the time has already return for one more season, however it’s here. The 2020-21…
byJacqueline
1 share
0
0
1

Stuck for 6 days, ‘Ever Given’ now afloat

NewsDio desk : The world attention was on the cargo ship after pictures of ‘Ever Given’ stuck on…
byDanish 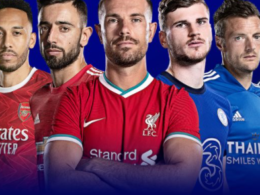 The Reds succumbed to defeat once again after a vicious match against Leicester City. Jurgen Klopp’s ranks have…
byDanish