The long-term feud between Kanye West and Drake is hitting the headlines again! Last week we got to know that the fight between two is not over yet when Kanye had a public spat with Drake on Twitter. Kanye has recently acclaimed Drake coming after his family.

According to West, this time the Canadian rapper is threatening his family. The fight got nasty with shocking allegations by the celebrities against each other. West has taken the matter to another level by tweeting more than 100 times against Drake. One of his recent tweets was “You threaten the safety of me and my family”. While Kanye is getting angry and bursting on Twitter, Drake is keeping his cool by responding on the tweets with funny emojis in return.
Hard to believe but they used to be friends once upon a time! Till 2009 the two rappers used to praise each other and have even collaborated on many projects together.

READ  2021 Predictions: What Psychic Nikki sees For Us In The Coming Year: A Slow Transition Back To Normal 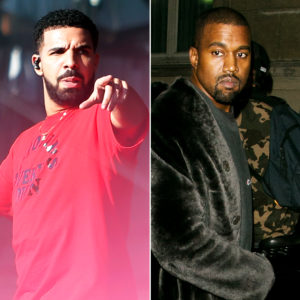 It all started when Kanye got dragged into the feud between Pusha-T and Drake’s rivalry. A track by Quentin Miller which was recorded for Drake proved that he used a ghostwriter. Taking advantage of the situation, Pusha-T, a big-time rival of Drake teased him via his songs with the lyrics, ” It was written like Nas, but it came from Quentin.” Kenya was involved in the production of this song.

The real beef between the rappers started when Pusha-T accused Drake having a secret son with a model (Sophie Brussaux). On this Drake alleged West that it was him who is spreading this news about him. However, he denied saying he has no clue why Drake is blaming him.

Later the feud seemed to an end when Kanye tried to settle down everything wishing Drake and his family best of luck and apologizing for whatever had happened. But then Drake started teasing West’s line of Adidas sneakers as ‘No Stylist’ in the track ‘French Montana’. One thing led to another and the former friends became enemies. It’s been almost a decade since these former friends are having clashes.

Recently, Kanye accused him of threatening his family saying “So drake if anything happens to me or anyone from my family you are the first suspect. So cut the tough talk.”

The behaviour of West was weird with so many back to back tweets against the Canadian rapper. But then suddenly what made him so much frustrated with Drake?

Reportedly it’s his wife, Kim Kardashian. As per the sources, the recent and very popular song by Drake “In My Feelings” was in reference with his affair with Kim Kardashian, Kanye’s wife. Here Kiki refers to the short form of Kim, the nickname of Kim Kardashian. Since then he has lost his control and started a rant over twitter targeting Drake.

When asked about the truth behind Kiki controversy, Drake kept silence making people believe that it is true. In the ‘Kiki’ song, he is implying that he had slept with Kim. He did that deliberately to tease the couple.

Whoa! So, this is why Kanye is so pissed off at Drake!

Kanye is always amidst controversies, but this time Kim has stood up for her husband. Kim Kardashian tweeted “Never threaten my husband or our family.

The feud between the two rappers seems like a never-ending controversy. This situation went for many hours and more than 100 tweets criticising each other and has become an entertainment topic for the people lately. Let’s see where it goes!

So, what are your views about the controversy? Do you believe that Kiki is Kim Kardashian? Or is it just a coincidence?  Do let us know in the comments. The best example of success in the affiliate marketing industry is Faiz Israili, a younger marketer from Ahmedabad,…
byZaheer
1 share
1
0
0

The NFL is gearing up for the start of the 2020 season and, while the games might look…
byVicki Ward
1 share
0
0
1