Khloe Kardashian reportedly planning for another baby with a boyfriend with Tristan Thompson. Kardashian sisters and family is going bananas over the news.

She was in limelight a few months back for giving birth to baby ‘True’ with Thompson. Now again she is willing to give birth to one more baby. Her family is freaking out on the decision. They seem quite angry with Khloe’s decisions with life lately.

The good-wishers and family members are shocked by her decision of getting pregnant again. Her fans are equally horrified. Everyone being angry with her life decisions seems quite justified.

She is a businesswoman, actor, model and entrepreneur and has achieved a lot at a very young age. Despite being such a successful woman, she is taking reckless decisions with her life, says her fans. 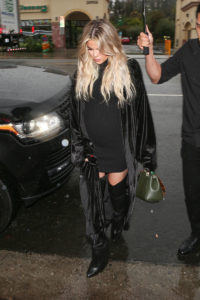 Seems like she wants her baby ‘True’ to have siblings just like she has her sisters by her side.  She has strong maternal feelings which are quite visible from her love for baby true on social media.

Reportedly her sisters have no issues of her giving birth to more babies. The problem is babies’ father. They just do not trust Thompson as per his track record of cheating. Having a baby with him again means getting involved with him more which can hurt Khloe later as per her family. It is not good for her future. He cheated her when she was pregnant with baby ‘True’ which is horrible. Kardashian fans criticized him a lot for this and even he bashed at fans saying “I would cheat Khloe if I want to”. Khloe forgave him and even requested fans to stop hating him so much but her family is never going to forgive him.

After all the news of Tristan Thompson cheating, nothing has affected Khloe. The couple is still together and always connected because of their baby, True.

As per her point of view, she has been born and brought up in a big family with so many siblings. Hence she wants her baby also to have a family like hers. After all the sibling bond is in the blood of Kardashians

Making Khloe understand anything about the situation is not going to make any difference. She always does what she likes to do anyway. Whenever someone is trying to make her understand something she becomes defensive and does the opposite. So it is better to let her do whatever she wants so that eventually she can realize what she is doing and what would be the impact of her actions.

However fans are really concern about Khloe’s future. She is not just dating a cheater but also getting attached to him producing children together. If they ever break up it will be hard on Khloe and her children also have to suffer with her.

However she is not pregnant yet but reportedly the couple is actively trying to make another baby. We support Khloe to make her own decision but she is becoming blind in love and not thinking practically.

On the other hand, she is 34 years old now and expecting more children is no crime. According to her, being pregnant was amazing and she misses the experience.

Maybe this is what she really wants. Anyway, we don’t even know that the rumor is real or not so let us not assume anything until we get a confirmation from her. Even if it is true, she is a great mother and the the baby will be lucky to be born in Kardashian family.

Online Banking has reserved a special place in the digital world. Almost every bank provides the facility of…
byZaheer Urdu author and Writer mujtaba Hussain is No More with us!

Today Morning at 09:00 AM Mujtaba Husain Passed away, This is Very Sad News for Urdu Language lovers…
byZaheer