Recently a video was uploaded in the official website of KKR to which the captain Dinesh Karthik had explained the reasons behind KKR for letting go off Chris Lynn, the Australian batsman. Dinesh Karthik, the Kolkata Knight Riders captain, Dinesh Karthik recently opened up infront of the media regarding this big decision that was made up by the franchise on this Thursday.

Karthik publicly spoke about reasons for not retaining Chris Lynn

He put forward the reasons for not retaining this explosive Australian batsman, Chris Lynn. This right handed opening batsman was bought by KKR in the auctions during the 2014, and then he was brought by the franchise later on for a whopping 9.6 crore during the auctions of 2018. KKR finally made a decision to let go off the opener last year despite Lynn’s high stakes. The batsman was picked at the base price of ₹2 crore by Mumbai Indians at the auctions in the month of December then.

See also  How to Get FREE and Easy FIFA Coins?

Karthik had explained the reasons behind the KKR for letting go off the batsman. He said, “We had to let go off Lynn with a heavy heart, whatever time he spent with the franchise, he was an absolute gun.” He further added on to it by saying, “Such are the dynamics of the auction that you have to let go of some players, Lynn is somebody I am really find off, he brings a lot to the table.”

Amidst all of it, the wicketkeeper-batsman did also go on praising the England Captain Eoin Morgan whom KKR had bought at a price of ₹5.25 crore. He adds on to it saying that Eoin has joined the KKR for this season and Karthik had met him only a couple of times. He appreciates him a lot by saying that undoubtedly he is a gem of a guy. He even says that he is someone that everyone looks at, and being a solid human being, he is a World Cup-winning captain. Karthik added on to his speech by saying, “England is the best white-ball team in the world, I would try to learn from him, he has a great mind.” He spoke positively on Chris and Eoin and he said that both of them are great pleasures and he did learn a lot from them.

However, the 13th edition of IPL will kick off from 19th of September, 2020 in the UAE. The final match would be played from 10th of November. The matches will usually take place in three major cities – Sharjah, Dubai and Abu Dhabi. Let’s see how the ball gets rolling, and what is there in the store. 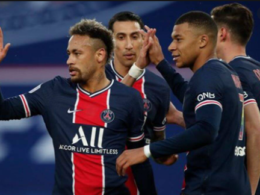 Should Mbappe Seek Pastures New Away from PSG?

Kylian Mbappe had a frustrating campaign at Paris Saint-Germain despite his performances on the field. The club missed out…
byDanish