Recently, the ‘black excellence’ routine of a US gymnast went viral on the social media with millions of views on the post. The floor routine of the athlete at the University of California in LA incorporated a few songs in the post by artists such as Missy Eliot, Kendrick Lamar and Beyoncé. She even said that the Black lives matter actually inspired the performance which further saw her kneeling while her fist as in the air. The 21 years old lass wrote it on her Instagram handle, “I had to… for the culture.” Nia even told it on a public forum about her routine stating that she had always wanted it to “be a celebration of everything [black people] can do, everything we can overcome”.

Sporting stars are known to take the knee in solidarity with the Black lives matter movement all across the world and the first salute was originally used in the 1960s and 70s in the form of a symbol of the Black power movement, and also for the struggle for civil rights. She further stated, “The subject of Black Lives Matter is so heavy. It is difficult for people to talk about – and sometimes you have to meet people where they’re at, with a celebration.” She went on continuing with the same, “Every single song is a major black artist, musician, from different time periods. They had a huge impact on black culture, which has also had a huge impact on me. So I’m just literally celebrating what they’ve done and having the time of my life.”

This video that was shared by the UCLA Gymnastics has originally taken away more than 9 million views and the routine has left the judges really awestruck. In fact, a lot of celebrities, fans and even the fellow athletes were actually seen to appreciate the gymnast. The judges gave her 9.95 score out of 10 for the performance that she had put up on Saturday and as a result, she could lead her team to victory against the Arizona State. As per the research, there has been a projected 1,200 to 3,000 deaths in excess in California in…
byZaheer 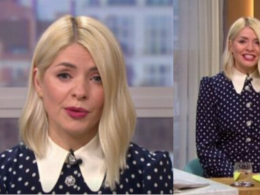 Holly Willoughby says that she is just about holding on

Holly Willoughby, this Morning host is all back to present Phillip Schofield after her absence for 2 days…
byZaheer