Rockstar games has been doing business in the gaming world from quite long, GTA franchise is the best example anyone could give about their reigning successful story. With the launch of the Red dead redemption 2 off-late, it makes the third entry in the western-themed red dead series. The game is a prequel to the 2010 Red Dead Redemption, set in 1899, it follows the character named Arthur Morgan that is an outlaw and a member of the Van der Linde gang.

Having released the game to the Xbox One and PS4 platform players have shared the game’s review and we are going to share the same with you without giving you the plot of the game.

The game has received good as well as bad response and this game is no different when it comes to receiving the judgement by fans on its story-line, graphics, controls etc.

We will go step by step to enlighten how it is been received by the fans. First, we will focus on the criticism and then we will reveal you about the good part. 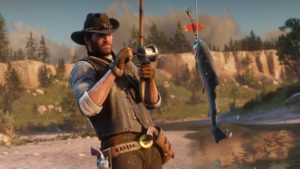 Red dead redemption 2 looks to allure the gamer with its endless new things that could be done in the game. However, the creator of this game could not guess the problem the long list of things will add to the game. Simply put, fans are enraged about the controls as many of the fans have experienced mishap to shot someone while talking, trying to get off the horse but accidentally rode into a tree; all these horrendous mistakes were experienced because of the numerous things which made the controls suffer.

This game is great to look at and makes the game more realistic while it also seems unnecessary. The game with all the repetitive graphics does not make the game look any real. When talking about the repetitiveness, at first the game’s animation may look beautiful, however, there are so many ways to hunt down the wolf to skin will make it repetitive down the line.

Red dead redemption 2 is a long game, and it takes like 2 weeks of daily sessions to complete and the critical consensus seems to be overwhelmingly positive: it has a 97/100 score on Metacritic which is the leading reviews aggregator.

After playing like enough hours one can say that the visual splendour of its world is often jaw-dropping, and you will surely notice tiny details: the muscles bunching under your horse’s skin as it gallops, how real the world feels, bar fights, and people rescuing from the bear traps along with hunting down the wolfs to skin.

Your character, Arthur Morgan, is a gruff criminal with some dark past, and the gang leader Dutch van der Linde is simply fantastic. Without revealing the plot of the game, we can say that the game has the potential with a real sense of struggle as the characters grow over the course of the narrative.

In short, the game is balanced between good and bad reviews and to take a plunge at the review you need to play this game before you believe some random guy’s review.

READ  How To Get A Titanium White Octane in Rocket League?
Total
0
Shares
Share 0
Tweet 0
Pin it 0 User experience is an area that game artists and developers don’t know much about. Considering how important it…
byZaheer