Samsung announced on Tuesday that it has begun mass production of a first 16 GB LPDDR5 (Low Power Double Data Rate 5) package for the next generation of its premium smartphones, after mass production of the 12 GB variant of the same package in July 2019 The new RAM module, according to the company, will enable enhanced 5G and AI functions and improve games, along with smart photography.

Senior vice president of memory sales and marketing, Cheol Choi, said that with the introduction of the new product line based on next-generation process technology, the company will be able to fully address the future memory demands of global customers.

Samsung's new RAM module will allow a data transfer rate of 5,500Mbps, approximately 1.3 times faster than the previous generation. The company, at its launch, also said that the new mobile RAM offers more than 20 percent energy savings while providing up to twice the capacity of an 8GB LPDDR4X package.

The new RAM module consists of eight 12 Gb chips and four 8 Gb chips, and is manufactured at the Pyeongtaek plant in South Korea.

“Samsung is committed to bringing memory technologies to the forefront to allow consumers to enjoy incredible experiences through their mobile devices. We are excited to remain faithful to that commitment to our new first-line mobile solution for global device manufacturers, "Choi said in the statement issued by Samsung.

The 16 GB LPDDR5 DRAM module will be based on Samsung's 10nm class second generation process technology. 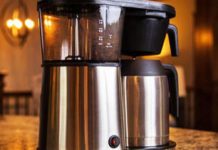 The best coffee maker to buy for 2020: Bonavita, Ninja, Oxo, Moccamaster and more admin - May 29, 2020
0
Editor's Note: Find the latest news and guidance from COVID-19 at the Medscape Coronavirus Resource Center. Here...

The Suicide Squad's original plan was to take him directly to... admin - May 29, 2020
0
Editor's Note: Find the latest news and guidance from COVID-19 at the Medscape Coronavirus Resource Center. Here...
©