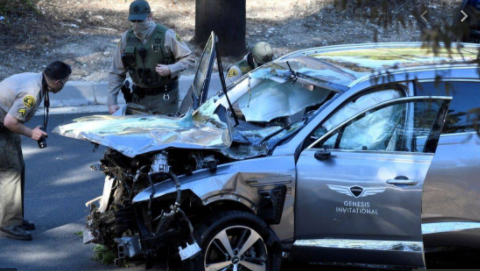 In shocking news for fans, Tiger Woods has injured himself in a car crash. He has suffered multiple leg injuries.

The timely response from LA County Sheriff’s Department to a single vehicle rollover was enough of a shock for anyone to enquire about the exact health condition of Woods. Since, his vehicle was badly damaged. Due to the mangled car walls, it took around 15 times for paramedics and firefighters to extricate him from the wreck.

However, good news coming through the official of LA County Sheriff, Alex Villanueva, that he is very much alive and in his senses at the scene where the crash has taken place.

In order to avail the speediest of medical assistance, the American was taken to the nearest medical center by ambulance in West Carson, California.

There has been a confirmation by Wood’s agent Mark Steinberg that he is undergoing a surgery on Tuesday.

Woods was called as a host of the Genesis Invitational tournament at Riviera Country Club in Los Angeles on weekend.

There has been an official statement from LA County Sheriff’s Department that they quickly responded to the crash occurring on the border of Rolling Hills Estates and Rancho Palos Verdes on Tuesday morning.

Later, while undergoing a press conference there has been an official statement from the chief of Fire Department where it is said that it took them a halligan bar and an axe to remove Woods from the luxury SUV. The only thing to worry was the severe injuries occurring to his legs, other than that, there is certainly no life-endangering injuries associated with him.

The way accident has occurred, indicated that Woods was maintaining a much higher speed that it was otherwise expected of him. Additionally, the area has lots of slopes and curves, as it is a downhill and it is equally considered as an accident prone area where the history suggests that there have been various accidents in the past as well.

According to the chief of fire department, the car hit a kerb, a tree and due to the enormous speed, it began to roll various times.

The chief further told about how they are in touch with the Wood’s manager, but they are reluctant to give them updates currently. However, one thing is clear that the accident is considered to be serious for sure.

The condition of the car, especially at its front has been quite unpleasant as the bumpers are destroyed.

However, the thing of respite has been that the interior is more or less intact as it acted as a cushion for him to survive from the sudden shock emanating.

Even though people are spending less time on the road, traffic accidents are still happening,” states Sam Dordulian, founder and managing attorney at Dordulian Law Group. “And if you are involved in a collision during COVID-19, it is essential that you take steps to protect your legal rights.
ShareTweet