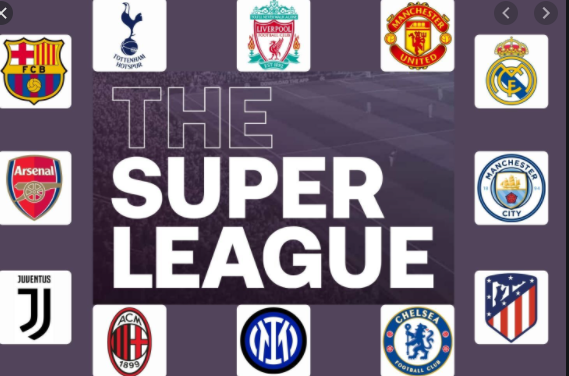 At the start of the week commencing 19th April 2021, there was a new European Super League in football. Twelve of the continent’s biggest teams signed contracts to play in it, and league president Florentino Perez – who’s also the president of Real Madrid – assured the press those contracts were unbreakable. The Super League, we were told, was a done deal. The teams involved in the controversial competition were braced for an initially negative response, but they all shared the same determination to see the competition become a reality. Midweek fixtures were expected to begin as early as next season.

Before we even reached the end of the same week, the entire concept of the Super League fell apart disastrously. The backlash from supporters, players, coaches and official sporting bodies was enormous. The British government got involved and threatened sanctions against teams and individuals. Fans in England set fire to shirts outside stadiums and hung banners from fences. Season tickets were cancelled. People who’d supported the same team for thirty years or more publicly said they were done with the clubs they’d loved all their lives, sick of their relentless greed and pursuit of more money. The global push back against the league’s formation became a tidal wave, and it looked like something would have to give. On Tuesday evening – fewer than 48 hours after the league was first announced – something did. Manchester City became the first team to announce it had reconsidered its plans and was backing out.

As soon as City said they were out, further withdrawals were inevitable. Chelsea followed suit. Liverpool, Manchester United, Arsenal, and Tottenham Hotspur withdrew within minutes of each other. Perez tried to tell the press that the competition would still go ahead without the English teams, but it always looked like a difficult sell. It became much harder hours later when Inter Milan withdrew. By the middle of Wednesday, AC Milan, Atletico Madrid, and Juventus had followed them. The league was dead. Chelsea fans celebrated in the streets before their game against Brighton and Hove Albion – a fixture that would never happen in the Super League – and the media presented the collapse of the league as a victory for the average football fan.

The league looked doomed from the moment it was announced. What’s shocking is the fact that the owners of the twelve clubs involved thought it would ever be an acceptable proposal to most supporters. Let’s name all of them as a full roll call of shame. From England, it was Manchester City, Manchester United, Chelsea, Arsenal, Liverpool, and Tottenham Hotspur. From Italy, Inter Milan, AC Milan, and Juventus. Spanish clubs rounded out the competition – Atletico Madrid, Real Madrid, and Barcelona. The league’s first official statement said that three other ‘founder’ clubs would join them. Things never got that far. Not one single team from Germany or France was involved. Ajax Amsterdam – champions of Europe several times in the past – didn’t even get a phone call about it. The head coaches and players of most of the teams – including all of the English clubs – weren’t consulted. Several of them bravely spoke out against it, putting their jobs at risk by doing so.

The supposed appeal of the Super League is that it would generate eye-catching, big-name fixtures every week. Never again would Real Madrid play in Europe against a “lowly” team like Shakhtar Donetsk or Ludogorets. They would exclusively play against big-name teams in the Super League in the hope they’d generate more money by doing so. The teams knew there would be resistance to the idea, but they were prepared to take a gamble. Gambling is the right way to look at this. Think of online slots websites, where a player has to produce the correct combination on the reels to win a prize. If the only symbols on the reels of those online slots were high-value ones, you’d win big every time. That’s what the Super League teams wanted to do. By closing ranks, they would remove the low-value fixtures and bank money from the high-value ones. If Rose Slots NZ did that, every other online slots website would go bankrupt because they wouldn’t be able to compete. If football clubs did it, many of the smaller clubs would cease to exist because those lucrative fixtures would never appear in their calendars again.

What the super-rich owners of the twelve clubs failed to take into account is that closing the ranks this way would mean removing the drama from domestic competition. The Super League was founded on the principle that the founder members would compete in it every season no matter how well or poorly they performed in their domestic leagues. Arsenal, for example, stands no chance of qualifying for the Champions League through the league table this season, but they’d have been in the Super League. West Ham, on the other hand, stands every chance of finishing in a Champions League qualifying position but would have been denied entry to this new Super League because they’re not considered to be a big enough club. The idea of teams qualifying for elite-level competitions based on merit would be dead. The founder clubs would be immune to relegation. Elite-level football as we know it would become sale and soulless, with the top clubs devoted only to making money from sponsors and fans in foreign countries.

In the immediate aftermath of the announcement of the league’s formation, Leeds United players wore t-shirts bearing the Champions League logo and the words “earn it” in their pre-match warm-up against Liverpool. That sentiment reflected the mood of fans worldwide. Any team that wins its domestic league or finishes in a qualifying position should be allowed to enter the Champions League, which is the pinnacle of club football competition. Leicester City’s Cinderella story in 2016 would have lost much of its sparkle if they won the Premier League but weren’t allowed entry to the top competition the next year. Arsenal could finish in the bottom half of the table and still play better fixtures than the league champions the following season because their place among the elite wouldn’t be in jeopardy. That’s what football fans found so unacceptable about the idea of the Super League, and that, ultimately, is why it failed.

This idea was borne out of the fact that Real Madrid and Barcelona faced severe money problems after years of overspending and needed to boost revenues. That was their motivation for starting the Super League in the first place. With that dream in tatters, they face the harsh reality of financial ruin. That’s not football’s problem – it’s theirs. Florentino Perez said he wanted to start the Super League to “save” football. In the end, ordinary football fans saved the sport from Florentino Perez.