What is google duplex? – Explanation, features, release date, and more

If you have not come across the term ‘Google duplex’ and what it actually does?  Then, this article will definitely enlighten what it does and how it will help us in many ways.

Announced at the I/O developer conference, Google duplex is a virtual assistant that takes up the burden of a busy person onto its shoulder and makes the that person’s life easier. Without being ambiguous we will straight-up cut to the chase and explain every bit of it. 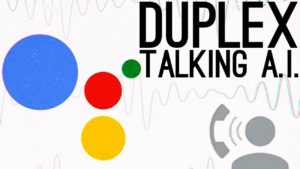 Google duplex is a new assistant feature that can carry out specific calls on your busy day where you may be too busy to make an appointment for a salon or to reserve a table at your favorite restaurant.

To have this super new assistant’s service, all you have to do is launch Google assistant on your phone and say, ‘Book a table at polka dots’ and there a human-like robot’s voice will speak up to get your reservation done. Google’s assistant can even handle convoluted conversations if one arises, thanks to the AI which empowers it in every unmanageable human conversation. After the call, you will get a notification on your phone confirming the reservation.

Google demonstrated the technology with two phone calls, one to a salon and another to a restaurant and it literally made people go berserk on how efficiently the assistant handled the conversation without making the person on the other side suspect for a robot on the line.

What makes Google duplex impressive is that it sounds like a real person with natural pauses and speech disfluencies (filler) like hmm, uh-huh and umm, when people try to accumulate their thoughts-Assistant does not sound like a robot at all.

Although Google duplex looks like an impressive feature with aptness to make our lives easier, it also seems creepy at sometimes. Talking to a robot is not what many people would like and many of them want the robot to identify itself at the start of the call, which is what Google is planning on doing.

When to expect it to hit our devices?

Google said it would be testing duplex this summer to see how it deals with getting appointments for a salon, reserving a table at a restaurant and getting holiday hours over the phone. We assume they will make it smart over time and give it the sheer brilliance to handle other tasks as well.

No news has come out on the release of the new software; however, rumors suggest that it will work only in English and then it might take up other languages to support soon.

Google duplex is complicated technology and we think it should be launched as it is advertised otherwise it might become a matter of controversy in no time than doing good. Depending on how the development of duplex is, it is possible we will have to wait for quite some time to see it in our devices as an operable software.

So, whenever they launch this software are you ready to take the service provided by the virtual assistant to make an appointment or to reserve a table? Well, it is all up to you, we suggest to run a test as soon as it will get released before judging it.

Tamil Nadu Electricity Bill Reading Too High? Here’s what to do !

Many times, in Tamil Nadu, people complain about their electricity meter reading being too high. To solve this…
byZaheer TikTok and Other 59 Chinese Apps Banned By India