That could buy some serious scores. Wrestling is changing as I hadn't in recent years and I don't see that change soon. For the first time since the Age of Attitude, fighters jump from one promotion to another and it is something that works for the better. Wrestlers now have many more options on where they end up acting, although WWE remains a viable option, even for someone with a unique role.

There are many fighters on all WWE lists and that means they need something to do. Unfortunately, there is not enough space to have them all in the ring, and it turns out that some of them are better used to do something else. That would include Elias, who exists primarily to sing funny songs and make fun of other fighters. It's not something everyone can do and WWE certainly seems to know.

During this week's WWE Backstage edition, Ryan Satin announced that Elias has re-signed with WWE in a multi-year deal. It is not known how long the contract will last or when it will begin, but the most recent WWE agreements have lasted five years instead of the more traditional three-year contracts. Elias has not fought frequently lately, since it has been used primarily for his songs since he returned from an ankle injury.

Elias knows how to do his thing. Check out some of their recent offers:

Opinion: Elias is the kind of person who can stay for years and it makes perfect sense for WWE to publish it every week. He can do something that nobody else can achieve and Elias sells it very well. While he may not be the best performer in the world ring, he can do what matters most: make people worry about him, what many fighters simply cannot do.

Are you glad that Elias stays? When will he fight again? Let us know in the comments below. 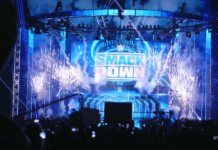 Robert Pattinson may have revealed his look at Bruce Wayne in...