Annabelle, one of the most demanding movie in the horror genre is on the cards with the third installment. Directed and written by Gary Dauberman, Annabelle 3 is all set for the nationwide release on July 2nd, 2019.

Started as a spin-off of “The Conjuring”, Annabelle series is a story of a demonically possessed doll which is inspired from some real-life incidents.

The popularity and success of ‘The Conjuring’ gave birth to Annabelle series which turns out as one the most popular and successful horror series. The first two installments with a small budget were able to impress the audience and do well on the box office. 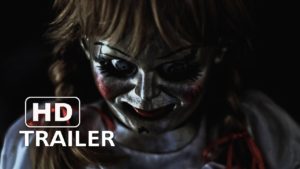 Recently released ‘The Nun’ was the biggest hit under the Conjuring Universe. Now Annabelle 3 is an upcoming fifth instalment of the conjuring series which is expected to be the most horrific movie of the franchise.

McKenna Grace has been cast in the lead role for the movie. She will be playing the role of Judy, the paranormal investigators Ed and Lorraine Warren’s young daughter and the next target of Annabelle. Recently Grace was in news for earning six figures for Annabelle 3. The 12 years old girl will also get an additional payment on the basis of the success of the movie. She was recently seen in the Chilling Adventures of Sabrina on the Netflix playing the role of young Sabrina. Most of the original star-cast will reprise their roles in the sequel including Vera Farmiga and Patrick Wilson as Ed and Lorraine Warren.

The movie is a prequel of the Anabelle (first installment) released in 2014. The story-line will see what happen when the haunted doll Annabelle is kept in the glass case at the Warrens’ artifact room. This time Warrens will be out of the house and the demonic doll will target Judy and her friends in the movie. Also, Annabelle has been kept with many other haunted artifacts. Annabelle might make all the ghosts and demons trapped in the house free resulting in a frightening situation.

James Wan, the producer of the movie had said in an interview that the movie is “basically Night At The Museum with Annabelle”.

There are rumors that the movie will see a cross-over between The Conjuring and Annabelle  which is quite a popular trend in Hollywood nowadays.

As per the sources, the movie will be very interesting and horrific than ever and is believed to be the best of the Conjuring Universe. Let’s see if the movie can break the records of ‘The Nun’ which was the biggest hit of the series till now.

Seems like Disney is planning to revive our childhood memories with its upcoming movie ‘Dumbo’. Recently Walt Disney…
bySana Usmani

Live streaming has become a part of daily life for COVID-19 between Zoom, Skype and Instagram meetings, but…
byadmin