Now after the two celebrities have parted their ways, they want to come out and tell the world their side of the story. The couple is full of frustration; especially Angelina Jolie. Reportedly, she was blamed to be a vicious woman who tore apart Brad’s family so now she wants to reveal the true colors of Brad Pitt in front of everyone.

The former most loved couple, Branjelina has broken up and filed for divorce two years ago. Since then they are fighting for the custody of their children. They have six children together: Shiloh, Zahira, Pax Maddox, Knox and Vivienne.

Recently the former couple has got a joint physical and legal custody of the children. Brad is fighting to get this custody since long without giving up. Finally, he got what he wanted, and he is quite happy. Reportedly Angelina has agreed to the deal after a long-protracted battle in the court room. Generally, the court favors mother for the custody of children but the father has the chance too provided he does not give up on his children. 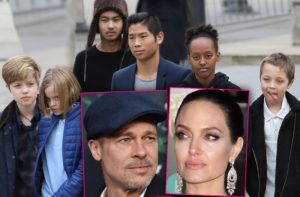 The hottest celebrity couple has parted their ways but since they have children together, things have become complicated. After the divorce, the two are communicating with each other through their lawyers. They are also using ‘Our Family Wizard’, a co-parenting app designed for situations like sharing financial responsibilities, co-parenting suggestions and everything related to child custody. Obviously using an app for parenting is less awkward than speaking to your ex.

Angelina has been portrayed as a horrific woman who wants to keep her kids away from their father. Brad has also implied that Angelina was a horrible woman who destroyed his family and took everything away from him.  The two were most epic husband and wife and were couple goals for people. No wonder they even hate each other with so much passion.

As per the deal they had in the court, they cannot blast each other or say anything negative for each other in public or media so Angelina is not allowed to spit anything against Pitt. But the insiders say that she is very smart. Whatever she does, she has a plan already. She might support women facing abusive relationships implying she had faced somewhat same situations. People supporting Jolie says what she does is justified. She has gone through a lot lately. Whatever she has done till now is to get the custody of her children. Supporting a cause does not necessarily means that she is doing anything against Brad. But eventually, whatever she does now people will interpret her every action like anything.

Anyway, their eldest child Maddox is turning 18 next year in the month of August. He might be sharing the true cause what led to his parents’ divorce and who between them is to be blamed. Hopefully, the truth will come out. While one pandemic rages outside, another one rages on the inside: the massive epidemic of stress and anxiety…
byZaheer

Happy Mother’s Day 2021: Simplest way to Surprise and thank your mom on this day

The sculpture of love and care always makes sacrifices for our happiness is termed as Mother. The word…
byZaheer