Don’t Breathe 2 is the sequel for 2016’s budget horror flick Don’t Breathe which proved to be one of the biggest unexpected hits of the year, racking up great reviews (88% on Rotten Tomatoes) and a worldwide box-office collection of over $157 million.

Fede Alvarez who is the writer and director of the first part has admitted he was reticent about revisiting the movie, his first reaction to the sequel was “No” as he did not believe in Hollywood’s popular culture of making sequels of successful movies encashing prequel success. Now, since he has confirmed Don’t breathe 2, the inspiration behind is a really exciting idea which he states to be stuck in his mind, but he refuses to disclose any further. 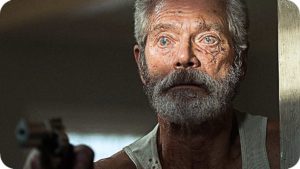 Star-cast:
Stephen Lang will be reprising his role of the main lead as a blind man whose daughter had been killed in a car accident, leaving him with a massive settlement but living as a recluse in the only inhabited house in a decrepit neighborhood. He managed to survive an attack on his home, although three others couldn’t.

It’s likely that Escapee Rocky (Jane Levy) and Diddy (Emma Bercovici ) would give the appearance in the sequel. But we would be very surprised to see how would the makers fit a comeback for Alex (Dylan Minnette), Money (Daniel Zovatto) and Cindy (Franciska Toeocsik) who didn’t make it out of the house Alive.

Trailer: when it is out:
Since the story of Don’t Breathe 2 is still in structuring phase, it will be tough to expect an exact date for the trailer release but it is likely that fans get a short teaser at the beginning of 2019 as an early promotional strategy. Though, it’s likely that we can see the trailer in San Diego Comic-Con in July 2019.

Release date- When can we see it:

Alvarez confirmed that the script for Don’t Breathe 2 was finished in early novembers so the film could start shooting very soon, but he did not confirm any exact date or month.

Don’t Breathe was released in August 2016 in the US so it’s likely that the makers aim for a Halloween 2019 release. IMDB currently slated for it to be released in 2019.

Don’t Breathe 2- Plot expectation and what could be going on in it:

The makers are keeping mum about the plot of the movie though they have mentioned that the focus would be more on the Blind Man who lost his daughter. It will not be a studio kind of movie says Raimi, the producer. He added saying that we have the greatest idea for the sequel.

Last year movie director Fede Alvarez made it clear that the sequel will not be a repetition of its predecessor. The makers are quite confident that they have a great concept for the sequel. These statements are already making us excited about it.

That means the movie will have the same elements but with a different and quite interesting plot. It is potentially great news for horror fans. Let’s just hope it doesn’t make us wait for too long to get released.

Salman Khan has come up with a great news for the audience. Recently, after the success of Race…
bySana Usmani

[ad_1] EXCLUSIVE: Maddie Hasson Talks About Working With James Wan For Malignant As the world waits with bated…
byadmin Don 3 – Brace Yourself! DON is Back Again

Shahrukh Khan aka Don is coming back on the screen very soon.  Farhan Akhtar has recently told media…
bySana Usmani