Peter and his friends are back on a furry sequel! Peter Rabbit 2 is a follow-up movie of this year released Peter Rabbit. Columbia Pictures has recently announced an unexpected sequel to the animated movie Peter Rabbit, a live-action animation movie in the action-comedy genre.

2018 released Peter Rabbit was the 6th film by Sony Animation which was quite a surprise package. The movie was able to attract adults along with the children and was a decent go out for families. For some people, it was stupid and irritating but most of the people loved it beyond expectations. It was not a very huge blockbuster but big enough for Sony to make its sequel.

The movie was released in the pre-summer season and had grossed $325 million worldwide. It is a fun watch and majorly targets kids but the great humor in the movie attracts an adult crowd as well. 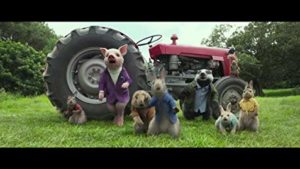 It is known for being a perfect blend of animation and live-action. It does not look much initially but is somehow irresistibly likable. It has some shortcomings like for kids it is adorable but a little violent also which might be inappropriate. Despite all this, it is more amusing than irritating. Overall it is a good watch for children as well as adults making it a perfect family movie.

The sequel of the movie is an upcoming live-action comedy scripted from the stories of Peter Rabbit by the writer Beatrix Potter. People have grown up reading these stories and hence the movie was able to pull adult audience as well. Plus, the movie has got some interesting elements to make it a worth watch for an audience of all age group. Director Will Gluck is back again to direct the sequel as well and had started working on it already.

James Corden had been confirmed again to give life to the main character Peter. Domhnall Gleeson, Daisy Ridley, Rose Byrne and Elizabeth Debicki are also reprising their roles in the sequel.

Columbia Pictures have confirmed that Peter Rabbit 2 will hit the floors on February 7, 2020.  The script will be finalized very soon and the production will start from early 2019.

There is no information about the movie plot as of now. It is still at a very beginning stage. But still, some people are predicting that Peter The rabbit will be going on a vacation with family in a new city and the script will follow his adventure. The script is expected to be better this time and will do justice to the flaws in the prequel.

Soon the trailer will be released and we will get a clear idea what to expect from the sequel. Till then we have to wait. BTS’s Bang Bang Con: Online concert seems to be a scream fest since the fans admit to turning…
byZaheer