THE MOST EXCITING AND ANTICIPATED GAME RELEASES OF 2019 (PART-2)

Continuing from our list of THE MOST EXCITING AND ANTICIPATED GAME RELEASES OF 2019 (PART-1) here are the next 5 games:

Releasing sometime during 2019 to the PC platform is Surge 2. Surge 2 is a sci-fi Dark Souls adjacent game and according to the developers it apparently has a much larger and more ambitious level design. They will also be adding a specific limb targeting system which will actually make a difference in the combat. This is a really good idea considering it could separate it from Dark Souls a little bit more and give it a bit more identity. Even though it probably has gone ahead and done enough of that it’s always nice to see it be its own thing.

Minecraft Dungeons is a spin-off of Minecraft. Of course, it is pretty self-explanatory that this is a dungeon crawler and it does look a lot more structured than Minecraft. This is probably because of it being in you know dungeon crawler rather than an open-ended building crafting experience. We haven’t really seen any gameplay from it but from the environments they showed in the trailer, it does look fairly unique and interesting and I think that it does seem worth paying attention to.

Minecraft is coming to PC sometime this year in 2019

Remedy Entertainment the folks responsible for Alan Wake: Quantum Break, the first to Max Payne games are frankly just really good developers and in a lot of ways this looks to be building on some of the things that they touched on in quantum break and while it will be a narrative game it also intends to give you the ability to sort of engage in emergent gameplay and create your own stories. We will apparently see to what extent that actually means later on but frankly, it looks like a good one.

Rage 2 which is being jointly developed by ID Software and Avalanche probably more focus on Avalanche considering they were brought into the fold because of ‘Just Cause’ and a lot of Just Cause like destruction-oriented gameplay is present in the trailer. So, we have to imagine that is at least part of it. This game takes place about thirty years after the first and the color palette is something that is enjoyable. It looks like a lot of fun kind of like a neon Mad Max so to speak.

READ  The life which gave birth to another was shot dead

If you remember the original Dirt Rally, you’ll remember a phenomenally tight polished game with a little bit less content than it should have but it’s pretty much one of the better rally car games period. Dirt Rally comes at a time when even more is possible. For instance, they’ve included surface degradation two areas in all the stages. So, as you continue to go over a road surface it will actually shift and break it’s probably going to do a lot in opening up exactly how you play the game 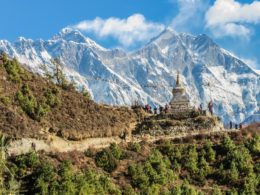 Recently, a team of 10 Nepali climbers did set a new world record. They became the first batch…
byZaheer
1 share
0
0
1