Board of Control for Cricket in India (BCCI) has recently announced the name of team members for T20I squads against West Indies and Australia. Surprisingly Mahendra Singh Dhoni is not a part of the team which is why his fans are fuming nowadays. This decision has created a rumour that it might be the first sign of the end of his career.

Mahendra Singh Dhoni started his career in 2004 and since then he marked himself as one of the strongest players in the history of Indian cricket team. He has a huge number of achievements and a crazy fan following. He has always been a great asset to the Indian cricket team. It is the first time that he has left out of India’s T20 squad. Rishabh pant and Dinesh Karthik are serving as his replacement. 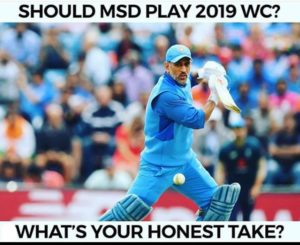 There are rumours that MSD is not in a good form lately which is why he was kept away from the selection of T20 cricket team.

Well, whatever is the reason behind this act, cricket lovers are certainly not happy with the decision.  People are wondering whether he will continue till next year’s World Cup.

One fan said,” Dhoni is a legend. He is the one who made India proud so many times. He deserves to be in the team no matter what.”

The ex-captain of South Africa, AB de Villiers also supported him by saying that he will keep him in his team even if he will become 80 years old or he is on a wheelchair. Well, that was quite a fan moment but certainly, he is an amazing player and has an excellent track record.

MSK Prasad, the chief selector of Indian cricket team asked the fans to calm down and said that it’s not the end for his career in T20Is.

Former Indian captain Kapil Dev in an interview said that people should understand that he is not 20 years old anymore. So, they should not expect him to be like that.

Some cricket experts are justifying the decision saying that no matter who the player is, if he is performing well, he will be a part of the team or else he will not be in the team. It is as simple as that. The next generation is coming out to be more energetic, enthusiastic and giving better chances for the team to win. Selection should be based on performance, not Hero worship. MS Dhoni himself says that no player is bigger than the team.

World Cup is just 6 months away and cricket fans are expecting MSD to be back in the ground. The good news is former Windies captain, Carl Hooper believes that MSD will definitely be selected for next year’s World Cup. His experience is valuable which is very important in big matches.

Meanwhile, Dhoni is celebrating his wife Sakshi’s birthday (19th November) with their daughter Ziva, Hardik Pandya, Sophie Chaudhary and many other celebrities being a part of the celebration.