After 18 years, the Tampa Bay Buccaneers have successfully earned their Super Bowl LV finals ticket. Tom Brady and Rob Gronkowski’s addition has helped the team punch a successful slate in the playoffs. Although they got an inconsistent seeding at the start of the season, they have found their momentum in the second rounds.

The Bucs entered the NFL postseason as the second-seeded team in the National Football Conference (NFC). They accomplished eleven wins and five defeats, sitting a step behind the New Orleans Saints. That said, they got to vie for a slot in the Wildcard Rounds, where they defeated Washington to move to the Divisional game.

As they entered the Divisional match, the Bucs had to find a way to dispatch the Saints. Fortunately, they got successful, followed by a Conference championship victory they took away from the Packers. Today, the Bucs got the underdog odds at top bookies like https://www.fanduel.com/theduel/sports-betting/nfl/super-bowl. Despite being the underrated team, here’s why the Bucs might win the Super Bowl LV title.

The NFL superstar player Tom Brady made the right decision of joining the Tampa Buccaneers this year. This man had given justice to a pricey sign-in-trade from the Pats during the Draft. After getting upset last year in the AFC with the Pats, Brady has to leave Bill Billiechick to wear the Bucs jersey this time.

As a six-time Super Bowl titleholder and an all-time MVP awardee, Tom Brady will surely be unstoppable during the Super Bowl finals. He had shown what he does best during the semis, which they left the Packers behind. Although Brady is aging, his caliber of playing has not changed through the years, and he will show his best this weekend.

Just as every football fan thought Rob Gronkowski is retiring as an NFL player, he made a surprising appearance in the Bucs’ initial line up. The Pats didn’t see this coming after Brady got off from the roster. Gronkowski had expressed his bid to leave his former team to join Brady as Tampa vies for an epic comeback this season.

Fortunately, the Brady-Gron tandem has worked for many years they’ve been together. Gron, which is Brady’s favorite target in the offensive line, makes the Bucs aggressive in the NFL today. Appearing both in the team’s offensive and defensive side as the starting tight end, Gron will not fail the Bucs this time.

Aside from Tom Brady and Rob Gronkowski, the Tampa Buccaneers got a powerhouse man to tap on. Going back to the semis where they easily defeated the Packers, Leonard Fournette has led the rushing points earning 12 carries in 55 yardages. Aside from him, Ronald Jones II has made ten carries in 10 yardages.

The Super Bowl LV finals are housed at Raymond James Stadium, Tampa, Florida. It is the home court of the Bucs, and they will have this advantage as they face the Chiefs in the championship slate. This is the first time that the Chiefs will travel all the way to Tampa, being the away team since last year.

Although audiences are limited and full health restrictions are imposed at Raymond James, the home-court advantage might contribute to the Bucs’ success. The field might not get a jam-packed audience, but the familiarity and being in the comfort zone will surely intimidate the Chiefs.

Kicking is perhaps one of the most overlooked departments in the NFL. This is a critical aspect every team should look for because it can either make or break the game. Many solid groups in this year’s playoffs have gone wrong in their games because of a mistake in the initial kicks.

With the Tampa Bay Buccaneers’ solid and experienced kicker Ryan Succop, they might have a clear end goal for Lombardi. In the last fifteen games, Succop had only missed one field goal. His accuracy and preciseness will indeed give the Chiefs a hard time to hustle.

Now that the Tampa Bay Buccaneers have earned the chance of ending a long drought to the Super Bowl finals, they will surely be different this weekend. Will the Brady-Gron tandem get activated and hyped during the finals game? Can the remaining powerhouse cast be in their best form to help the team earn the Lombardi first time in a long time? Or will their hard work won’t count as the Chiefs get ready to disappoint them? We’ll see. 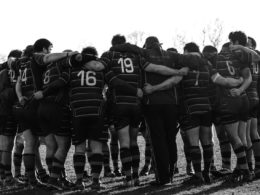 Stadiums to homes, Denver is one of the best cities to live in for sports fans. The world…
byRadhe Gupta

You stand a better chance of winning at any type of betting if you have a solid strategy.…
byDanish